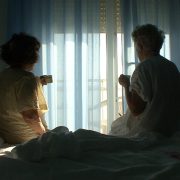 We are proud to announce that ‘Between sisters’, by Manu Gerosa has received a post-production grant from Doha Film Institute. ‘Between Sisters’ tells the story of two sisters, Ornella and Teresa. They have taken care of each other their whole lives. Teresa is now in her life’s twilight and she’s having trouble facing fate, whilst her memory is slowly fading. Before it’s too late, Ornella decides to confront Teresa with a painful untold story that goes back to their childhood and might change their close bond forever.

The film is a warm portrait of an Italian family, seen through the eyes of Ornella’s son, Manu. With humour and tenderness the film brings out what it means to build a life upon a secret.

The project has been developed through the DOK.Incubator workshop.

Slingshot Films is in charge of the international sales for the film.

“The reward from Doha Film Institute confirms the universality of the story told by Manu Gerosa. He faces with respect and sincerity the relationships inside is own family. Manu Gerosa has been able to tell an intimate story with humour and care, turning it into a film to be enjoyed by wide audiences. We wish to bring the film to international marketplace, and to support the talent and passion for stories of this new author.”