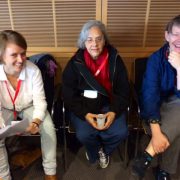 Both filmmakers have had several films in the official competition of Visions du Réel in the past.

This new project raised a lot of interest both from coproducers, distributors and international televisions.