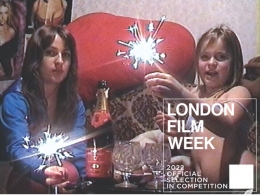 London Film Week presents the UK Premiere of Love is not an Orange by Otilia Babara.

Through the use of intimate private archives, Otilia Babara depicts the fragility of family bonds through the eyes of a generation of Moldovan mothers and daughters who were forced to live apart in order to survive. While doing so, she portrays a post-soviet country caught in a crossroads of history. A country whose women were unwittingly put in charge of making the transition from communism to capitalism.