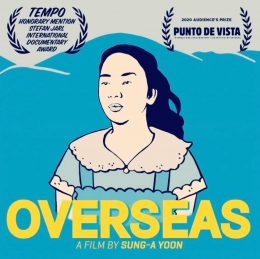 Congratulations to director Sung-a Yoon and the team for the double honours last weekend for the film ‘Overseas’!

Jury statement:
“A reminder of the simple elegance of the documentary form. The film succeeds in capturing rarely documented voices and faces with candour and dignity. An engaging view of world politics from a micro perspective.”